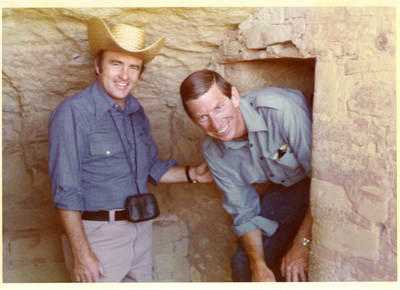 Charles Edward Perry (Chuck), 1937-1999, was the founding president of Florida International University in Miami, Florida. He grew up in Logan County, West Virginia and graduated from Bowling Green State University. He married Betty Laird in 1961. In 1969, at the age of 32, Perry was the youngest president of any university in the nation. The name of the university reflects Perry’s desire for a title that would not limit the scope of the institution and would support his vision of having close ties to Latin America. Perry and a founding corps opened FIU to 5,667 students in 1972 with only one large building housing six different schools. Perry left the office of President of FIU in 1976 when the student body had grown to 10,000 students and the university had six buildings, offered 134 different degrees and was fully accredited. Charles Perry died on August 30, 1999 at his home in Rockwall, Texas. He is buried on the FIU campus in front of the Graham Center entrance.

Reed, Nathaniel P. (Nathaniel Pryor), 1933- serves on the Board of the National Geographic Society, the Everglades Foundation where he is Vice Chairman, and the Hope Rural School for migrant children. He received a B.A. from Trinity College in Connecticut. He was an officer in the U.S. Air Force and was Assistant Secretary of the Interior for the U.S. Fish and Wildlife Service as well as the U.S. Parks Service. He has also served on the boards of the National Audubon Society, the Nature Conservancy, the National Parks and Conservation Association, and the American Rivers. He is a board member emeriti of the Natural Resources Defense Council and 1000 Friends of Florida. He served on various environmental organization and committees under seven different governors in the state of Florida including as Chairman of the Commission on Florida’s Environmental Future. In 1972 he received the Cornelius Amory Pugsley National Medal Award.