Edited by former LACC Director, Eduardo Gamarra, this issue asked prominent Bolivian journalists and social scientists to critically analyze the first year and a half of Evo Morales’ government. Popularly elected in December 2005, Morales promised to conduct a revolution in democracy. In this collection of essays, the objective is to show a different view than the image of Morales as the Bolivian Nelson Mandela who freed his indigenous brethren from repression. The essays gathered here tell the story about how Bolivia’s first indigenous president has attempted to change Bolivia. These essays show that Morales’ first 18 months in office have been filled with promise, controversy, and conflict. 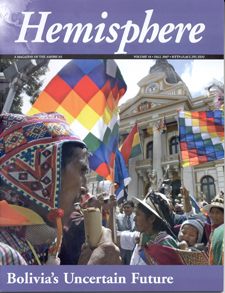