Charles Perry and a Group of People Outdoors 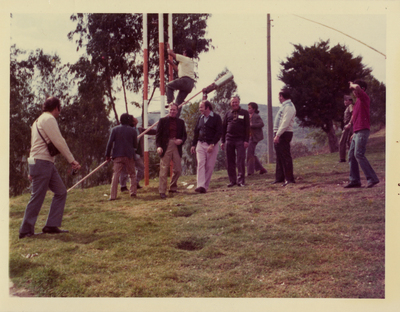 Charles Edward Perry (Chuck), 1937-1999, was the founding president of Florida International University in Miami, Florida. He grew up in Logan County, West Virginia and received his bachelor's and masters's degrees from Bowling Green State University. He married Betty Laird in 1960. In 1969, at the age of 32, Perry was the youngest president of any university in the nation. The name of the university reflects Perry’s desire for a title that would not limit the scope of the institution and would support his vision of having close ties to Latin America. Perry and a founding corps opened FIU to 5,667 students in 1972 with only one large building housing six different schools. Perry left the office of President of FIU in 1976 when the student body had grown to 10,000 students and the university had six buildings, offered 134 different degrees and was fully accredited. Charles Perry died on August 30, 1999 at his home in Rockwall, Texas. A commemorative plaque on a large coral rock is located in the southeast corner of the Primera Casa building, also called the Charles Perry building, where Perry is now buried.