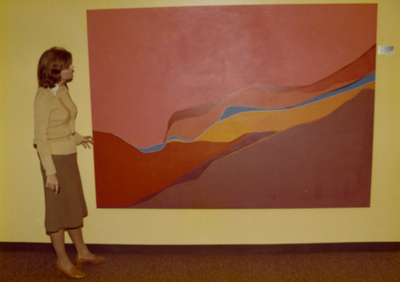 In the late 1970s, FIU had an enrollment of less than 5,000 and two buildings made up the entire campus. Adjunct professor, at the time, Dahlia Morgan was asked to take over the art museum, which was then called the Visual Arts Gallery. During her long career with Florida International University, Dahlia Morgan transformed a modest student gallery on the Miami campus into an internationally celebrated art museum. In 1980, after teaching for five years in the visual arts department she accepted the directorship of the university’s Patricia & Phillip Frost Art Museum (formerly the Art Museum at FIU).

As director and curator, Morgan instituted a lecture series, increased the frequency of exhibitions and developed numerous other programs including a student internship program. The Steven and Dorothea Green Critics’ Lecture Series was started by Morgan in 1981 and has now organized, hosted and presented over 100 lectures by internationally renowned artists, critics and scholars who include Pierre Rosenberg, former Director of the Louvre; Hilton Kramer, Art Critic; Helen Frankenthaler, American artist; and Michael Graves, architect and designer. In 1985 Morgan started the exhibition series “American Art Today,” which featured an annual examination of a specific subject or concept in American Art. Morgan curated and organized over 200 exhibitions during her directorship. Under Morgan, the Frost Art Museum grew to achieve local, national and international recognition as one of South Florida’s key cultural institutions. In 1999 the museum received accreditation from the American Association of Museums and in 2001 became an affiliate of the Smithsonian Institution. With the turn of the 21st Century the initiative to build a new facility took shape and in 2008, the new 46,000 square foot Patricia and Phillip Frost Art Museum opened to the public. Morgan is a four time National Endowment for the Arts Grants Panelist and member of the Art Basel Miami, Host Committee. She is listed in “Who’s Who in American Art” and in “Who’s Who of American Women.”

Morgan’s largest accomplishment was seeing the completion of the 45,000 square foot Frost Art Museum built across from the Wertheim Performing Arts Center. Morgan’s fund raising techniques helped her raise over $12 million for its development. For 25 years, Morgan has served as director of FIU’s Frost Art Museum.