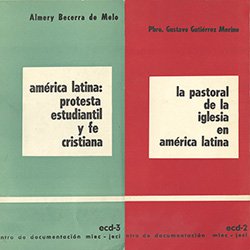 History of the Project

DARLAC (Digital Archives on Religions in Latin America and the Caribbean) is a digital platform available at: http://dpanther.fiu.edu/dPanther/collections/DARLAC. Its aim is to build an ultimate repository of unique and endangered intellectual sources that speak to the Latin American socio-religious movements of the twentieth century. This innovative digital initiative will serve as a large documentation reservoir for a complex and extremely rich historical process that has often been misrepresented in contemporary US narratives about Latin America. Bringing to light the primary sources of this historical process, this project will contribute substantially to scholarship, teaching, and public knowledge by facilitating more accurate and complete understandings about a crucial period of the history of the Americas.

The first materials engaged by DARLAC were privately donated to the Green Library at FIU in 2013, by the Carlos H. Uran’s Family Collection focusing on Latin American and Caribbean Catholic students’ organizations but the aim is to preserve materials in danger on all religious experiences in Latin America and the Caribbean.